Support for the Gnu Compiler Collection on MPE/iX

The latest versions of GCC and related tools may be downlaoded from DIS International.

Allegro Consultants, Inc, in association with DIS International, is offers annual support contracts covering the GNU Compiler Collection and related tools, including the GCC C and C++ compilers for MPE/iX.

The free GCC C and C++ compilers have been available on MPE/iX for several years now, and are used for mission-critical applications by many organizations including Hewlett-Packard. Until now, assistance was available only from Mark Klein of DIS on a limited, voluntary basis. Mark originally ported GCC to the HP 3000, and he continues to maintain the software and port new versions.

Because of the increasing popularity of the GCC compilers on MPE/iX, the number of calls Mark gets every day regarding GCC has increased to the point that he can no longer afford to spend the time which would be required to help each user who calls him.

This new association between Allegro and DIS will allow Mark to continue to do something which he enjoys, working with GCC, and will provide an official support channel for GCC on MPE/iX, with specific features which will address the need of many customers for a source of support that they can turn to for GCC support issues similar to the services HP provides for their compilers.

Allegro has many years of experience both in providing support for MPE/iX and with compilers for PA-RISC architecture computers, such as the Splash! Native Mode SPL compiler.

Support contracts start at $1,995.00/year for an unlimited number of HP 3000 computer systems with two designated callers. Additional options are available for large organizations who need to designate more than two authorized callers, or who want the additional security of 24×7 coverage.

Besides funding the support organization, a portion of revenues will be used to make further improvements to the GCC suite on MPE/iX and to port and integrate new GCC languages and features as they become available.

GCC stands for the “Gnu Compiler Collection”, a free suite of compilers and related tools developed by volunteers all over the world using the “open source” development model. GCC is licenced under the GNU General Public License, which requires that the software and its source code be freely available.

GCC used to stand for the “GNU C Compiler”, but the new name reflects the fact that GCC is actually a collection of compilers that includes C and C++, but also includes languages like Java and Fortran. Others, including COBOL, are being developed.

Currently GCC is the only C++ compiler available for MPE/iX, and the GCC C compiler is the tool of choice for porting software to the HP 3000. It is used extensively inside HP in support of projects such as Java/iX and the HP WebWise Secure Web Server for the HP 3000.

Which compilers from the collection work on MPE?

Today the primary use of GCC on the HP 3000 is for its world class C and C++ language compilers. The following languages are also provided in the current distribution but have so far seen little use on MPE/iX: Chill, Objective C, Fortran 77, and Java.

There are currently GNU projects working on Pascal, COBOL, and improved Fortran compilers. When these compilers become part of the mainline GCC code, we hope to bring them to MPE/iX.

The software is free, so why should I pay you for support?

Allegro and DIS are going into the business of offering commercial support for GCC on MPE/iX not so much to get rich as to ensure that the latest GCC tools continue to be available, and that those customers who will only use “supported” products have someone to turn to in the event of problems. Of course we have to be able to make enough money to justify doing this instead of something else!

The income from GCC support contracts will allow Allegro to provide our customers with the security of knowing that they have someone to turn to when they run into issues using the “free” compiler software, and it will begin to provide some compensation to Mark Klein for all of the hard work that he has been doing on his own time to port, promote, maintain, and support GCC on MPE.

By working with Mark on new development, Allegro will also provide a backup knowlege base so that customers are not dependent on a single person for the continuation of a critical component of their infrastructure. Not that we’re worried about Mark flying into a mountain or anything like that.

Can I get GCC support from HP or someone else?

Currently we’re the only source for GCC support for MPE/iX that we know of. Since GCC is “free” software, anyone can go into the business of offering support or consulting services for it.

By signing up with Allegro, you have the advantage of Allegro’s many years of MPE/iX compiler and internals knowledge, professional support and development staff, and of course Mark Klein, the original porter of GCC to MPE and the current guru of GCC porting, development, and support.

In addition, we intend to use proceeds from the support business to fund further porting and enhancement efforts for GCC on MPE. By signing up for support, you’re supporting the future of GCC on the HP 3000, and you’ll have a chance to influence which new enhancements get worked on.

So what do I get for my money?

For your support fee you’ll get one year of “Response Center” level support for the latest version of the GNU Compiler Collection for MPE/iX. This includes unlimited telephone and email support for two authorized callers within your organization. You’ll also get the opportunity to vote on which enhancements or porting efforts you would like to see us work on.

Since the GCC software itself is free, we don’t care how many HP 3000 systems you have. The support price is based on two authorized callers, which means you will need to route all GCC support requests through a primary and alternate designated individual in your organization. This would typically be a Develoment Manager or Lead Programmer, or a System Mamnager. By limiting the number of callers, we can more effectively coordinate when you encounter multiple problems rather than having people from all over your organization calling us at once.

Will you debug my programs for me?

Nope. Just as with compiler support form HP, we’re here to help you install and use the software, answer questions about using it, and help resolve issues regarding the compiler itself, but you’re responsible for finding and fixing your own bugs in your own programs.

What if I need 24×7 coverage or more than two authorized callers?

Just give us a call and we’ll work something out for you.

To request further information, please fill out our contact form. 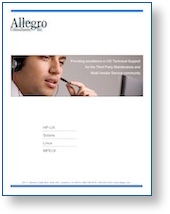 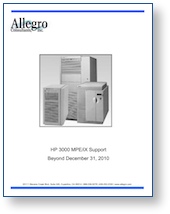 Infoworld article: Is it time to switch to third-party software support?

IACCM article: Seven Common Technology Service Misrepresentations and How to Monetize Them